made in Germany by Blackfield Orchester-Elektronik, 1970s 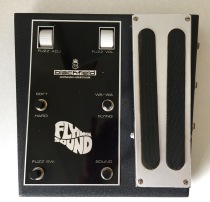 Rare as hell, never came across another sample of the Blackfield Flying Sound. The unit was built in Germany in the early 1970s, most likely in 1971, according to the date codes on some components (mid to late 1970). Did I mention that it is huge: 27 x 28 cm - and heavy: 2,9 kg. The pedal combines the two most popular effects at that time, Fuzz and Wah, plus a rather new effect for a floor pedal back then - a swirling phaser. The Fuzz offers two stages by employing the soft/hard switch, the Wah can be altered with the sound switch from a lower, more bassy setting to a rather trebly one. The same sound switch alters the Phaser (Flying Sound) from bassy pulsation to trebly whirr (think color toggle on a Soviet EH Small Stone). An accompanying power supply delivers 12 Volt DC to run the unit.