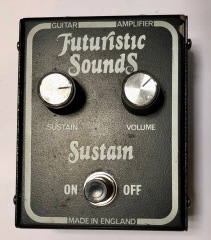 Extremely rare late 1970s sustainer pedal (which may have been) designed by engineers related to Colorsound/Sola Sound. It is also identical to the Orange Sustain and the Dharma Sound Sustainer, they all share the same pcb/circuit "D1087/2". But unlike the Dharma Sound version (18V) the Futuristic Sounds Sustain operates on 9V.

When fed into an amp's 'clean channel, the pedal adds a transparent, neutral sustain. But once plugged into the "lead/distortion" channel the pedal really shows its class, producing long sustain along with amazing lead harmonics.