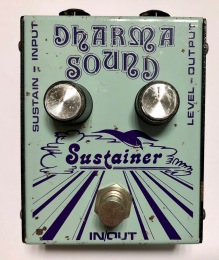 Extremely rare, mid-1970s, sustainer pedal (which may have been) designed by engineers related to Colorsound/Sola Sound. It is also identical to the Orange Sustain and the Futuristic Sounds Sustain, they all share the same pcb/circuit "D1087/2".

When fed into an amp's 'clean channel, the pedal adds a transparent, neutral sustain. But once plugged into the '"ead/distortion" channel the pedal really shows it's class, producing sustain together with amazing lead harmonics. Different to the Orange and Futuristic Sounds versions the Dharma Sound operates on 18V (two 9V batteries).