handmade in England by James How Music Strings Ltd. 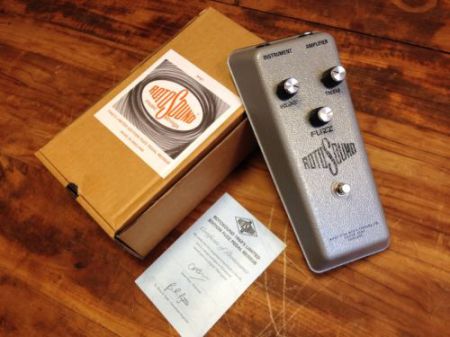 The Rotosound 1960s Reissue Fuzz is a reissue of a legendary effect pedal which originally never made it to full-blown production. This faithful reproduction of the original 1960’s unit has a new circuitry designed by Dr. Barry R. Pyatt (of BBC & Rediffusion history), but largely using the same circuit configuration as the original design, combined with modern resistors, capacitors and original germanium diodes. The original prototype pedals of the 1960s were only ever available in limited numbers and never released for general sales. Nonetheless these pedals were found all over the place. For a short period in June 1969, Page used the Rotosound MK III. There is even a picture of  Page playing one.

Jason How, the son of the founder of RotoSound, decided to have the MK II re-imagined. Like the original, a Darlington Pair of germanium transistors were used for a high input gain. Some components were updated since their original counterparts were not available. The original style of battery was no longer available in the UK, so a more current PP3 (9-volt) was used. All units are hand built at the RotoSound factory in Sevenoaks/Kent, England, announced as a limited run of only 2,000 Fuzz reissues. The pedal (RRP £250, $379) is encased in a pressed steel box finished in a gloss silver hammer powder coating, again mimicking the traditional Rotosound pedal. It is extremely robust, durable and hardwearing.

The Fuzz control changes the amount of drive, from a soft crunch to a gruff growl, but retaining that fabled germanium roundness. The Treble control varies the ratio of bass to treble, allowing a good variation from muddy to crisp. The Volume control varies the output level.