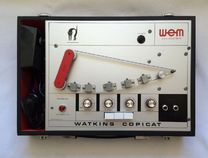 Anyone who was around and gigging in the '60s and '70s  will be intimately familiar with the Watkins Copicat, a tape-loop echo unit which was originally based on valve electronics, though later versions (like my Mk. IV model) used transistor circuitry. It was affordable and sounded great, but like most things back then it was pretty noisy, and the tapes had a habit of snapping during your best solo or vocal. Today, every effects box includes digital delay, but some players still hanker after the distinctive sounds of the tape-based original. Guess why? I strongly recommend: Don't miss it out if you come across a decent priced unit. Mine was 180 Euro (eBay in 2014) including the nicely branded dust cover.