made in Japan 1972 by pre-Korg factory Keio 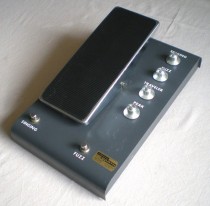 Honestly, this is one of my top ten pedals (I'd even say top five). It is an early 70s Wah-Fuzz with an additional monophonic synthesizer, engaged by the left foot switch and controlled by the rocker. You can do some Theremin-like sounds with it.

This pedal was built in small quantities during the early 70s by the Japanese factory Keio, which subsequently changed its name to Korg (a shortened form of Keio Organs). Unfortunately the sticker with the serial number got lost on my unit, but the dual wah pot states clearly the year 1972. All units I ever came across (half a dozen in ten years) were built between 1972 and 1974.

Jacques Charbit of Jacques Stompboxes has reissued this thing in a much smaller housing and called it "Singing Geisha" - not a bad name for this Japanese beauty.