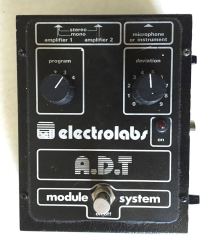 A.D.T. or automatic double tracking means a signal is copied and made it sound like the singer or instrument overdubbed the exact same thing over the original track. A.D.T. has been used on countless records in music history, most notably for vocals and guitar. John Lennon is famous for using it in almost all of his later tracks. Being so insecure about his voice, he loved the sound the engineers got when they doubled it in this manner. The Bell Electrolabs A.D.T. uses four (!) Reticon SAD512D chips for doubling and delaying the signal. The same unit (with more knobs to alter the signal) was available under the other Bell label called "PAiCE".