Number One Compact Phasing "A"

Built in the 1970s by Gerd Schulte Audio Elektronik, Berlin/West-Germany 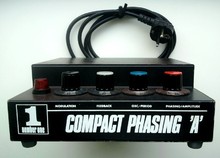 Famously known as the "Krautrock Phaser", this unique sounding phasing unit was built during the 1970s in West-Berlin/Germany by Gerd Schulte Audio Elektronik. According to various sources the Compact Phasing "A" was used by Kraftwerk, Tangerine Dream and Klaus Schulze.

Despite of varying enclosure colours the circuitry seem to have remained the same throughout the years of production. The different enclosure colours I have come across where white (quite common), black (common as well) and orange (quite rare). My personal unit (see photos) is missing the original on/off footswitch. Apparently there were two types of foot switches available, one for simple on/off, the other for controlling phasing speed and depth. I never saw one of the latter switches in real. If anyone out there happens to own one, please send photos - I want to build one for my unit.