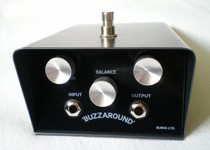 The 1960's original, the Baldwin Burns Buzzaround, is among the most sought after and insanely rare fuzz pedals of this planet. A brief digression in history: Between 1965 and 1968 the merged UK subsidiary of Baldwin Piano & Organ Company and Burns London, called Baldwin Burns Ltd, produced a small number of guitar effects pedals. One of these was a fuzz pedal called the Buzzaround. Gary Hurst reportedly designed this pedal around 1966/67 (unconfirmed and probably hearsay) and the circuit is extremely close to the 3-knob Tone Bender circuit. Those with a flair for the conspiracy theory suggest that, with very good reason, the Sola Sound Tone Bender MKIII is basically the Buzzaround circuit with the addition of a tone control. The Buzzaround pedal contains three knobs, being Sustain, Balance (this is basically a bias control for Q3) and Timbre (a volume/tone control, which is never fully off).

In 2010 British JMI Amplification commissioned to build a limited series of 50 faithful reproductions (my guess: 200)  under the license of the Baldin company. Using a steel chassis, tag board circuit and new old stock germanium transistors provide look, sound and tone almost identical to the original unit. By the way: mine is #26.