made by The British Pedal Company (former JMI) in England, 2013 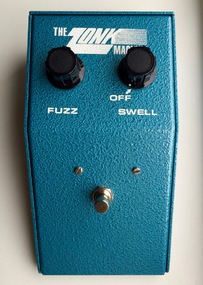 BPC The Zonk Machine, made in England 2013

One of the more famous Tone Bender MKI influenced fuzz boxes and now almost as legendary as its golden cousin was the John Hornby Skewes Zonk Machine. A little more wacky in the graphics department, but not as heavy duty or robust as the MKI, the Zonk Machine was almost identical in its circuitry. Made between 1965 and 1966 in Leeds, England, the Zonk Machine like the MKI was only made in small numbers before the pedal was updated with a more modern and easier to produce unit. This particular unit is a BPC (the BRitish Pedal Company) made reissue from 2013.