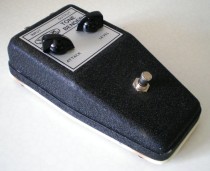 The VOX Tone Bender V8281 could be best described as a pure 60s psychedelic fuzz. It has a rather nasal and raspy fuzz sound without a lot of lower end. It cleans up nicely with either the guitars volume knob or the attack knob. You can achieve plenty of output thanks to two germanium SFT transistors inside this pedal. In most of the cases one is a 363 and the other a 337 which was standard for the later units. Due to unknown reasons mine sports a Mullard OC44 yellow jacket instead of the 363, seemingly to be absolutely original. I have no idea about the exact year of production but my guess is more likely early 70s than late 60s.