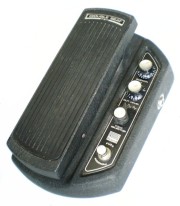 The Roland Double Beat is another of those funky Japanese 1970s Fuzz-Wahs. The Fuzz section is pretty well done. The first stage has a fairly good sound, which is a lot like a Fuzz Face, followed up by yet another gain stage to distort even more. The three fuzz tone selections are quite different from each other.﻿ Then you can kick in the wah and either do fuzz wah or plain old funk wah with no fuzz.﻿The wah function is nothing spectacular, tarnished by a slight volume drop when engaged. Built from 1973-1979.