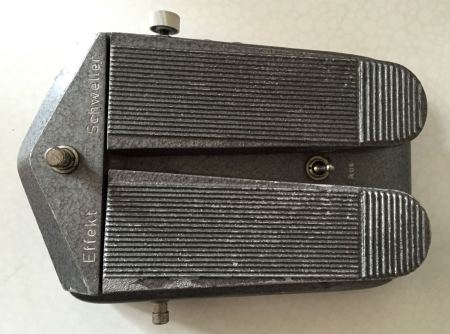 Today the Schaller Universal-Fußpedal is mostly referred to as "Double Pedal". I have no idea how Schaller marketed this monster of a pedal internationally, but they surely had to find a more suitable name than "Universal-Fußpedal" - and a merely descriptive name would have been too long: a Fuzz/Treble-Bass-Booster/Tremolo/Swell-pedal with with dual treadle control. So as a consequence someone probably came up with "Double Pedal".

What is it all about: The "Schweller" named pedal on the right functions as a global volume control. In other words, the Schweller "schwells" whether the effect is engaged or bypassed. The "Aus" switch, sitting between both treadles, is for bypass ("Aus" translates to “Off”). The "Effekt" pedal on the left works as an intensity/amount of whatever effect is engaged – Fuzz, Treble Boost, or Tremolo. The unnamed switch on the front turns the Fuzz mode on or off. When the Fuzz is off, the push button switch on the left side toggles between Treble Boost mode and Tremolo mode. Finally, the knob on the other side adjusts the speed of the tremolo. The Treble Boost is extremely loud when both pedals are all the way down, but of course it can be adjusted by one or both pedals. The fuzz is powered by a couple of ATES AC192 germanium trannies and does what you may know from the stand-alone Schaller fuzz boxes. Engaged along with the Treble Boost you receive a pretty brutal wall of sound with quite some hiss and white noise. The tremolo is a standard Schaller tremolo, which is always very cool. Bottom line: rare, cool, collectible and a wee bit versatile.