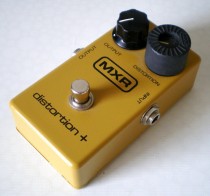 The MXR Distortion+ was originally designed in the early 1970s by MXR Innovations. Despite its name it has a rather mild, more overdriven sound and in fact a similar circuit as many overdrive pedals (e.g. DOD 250). The pedal uses a single op-amp and a set of two germanium diodes for clipping rather than discrete transistors. It sports just two controls for output and distortion, there is no tone control. This pedal gave Randy Rhoads his signature sound in his work with Ozzy Osbourne.