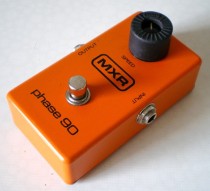 The Phase 90 - released in 1974 - was the first pedal sold by MXR and helped launch the company. The first issue came in a simple orange enclosure with MXR's script logo. In 1977 MXR implemented the change to the current block logo. Beginning of the 80s a LED was added. Production ceased when MXR broke in 1984.﻿