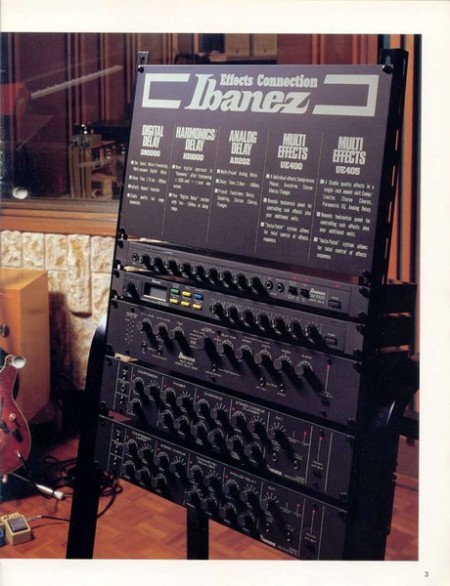 One of Ibanez' most important contributions in the late 70s and early 80s were affordable rack mount analog and later digital delays and multi-effects for the working and touring musician. Until then high-fidelity electronic delay units that could create the increasingly popular echo, flanging and chorus effects were only affordable for large studios. However bands like the Grateful Dead, who were getting used to having those effects at their disposal in the studio, wanted to take the sound out on the road as well. And this is where Ibanez came in. The AD-230 was the solution for almost any musician's expectations or - as Jerry Garcia of Grateful Dead stated: "This is the cleanest, most effective and best all around electronic effect for guitar or studio that I've ever come across. There's a whole wide range of effects available from it and it's truly hi-fi. I consider it a product of real importance in the world of effects." Ibanez offered a downscale version with less effects, the AD-220, as well as an upscale studio pro piece , the AD3000 with separate delay and flanging sections in 1979. The analog era ended in 1982 with the AD202, a crossover unit, which combined both PA and player feature at $200 less than the AD-230.