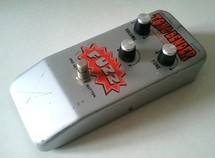 Unlike the earlier models (e.g. 1974) this narrow box Tone Bender Mk. III features a Jumbo Tonebender board (why the hell Sola Sound came up with a wide box, when the Jumbo board fits perfectly well into the small enclosure???). You can easily tell the difference already from the outside. The upper right knob of the older version reads "Treble/Bass" whereas my later version reads "Tone". A nice pedal to own, but definitely not my favourite fuzz.