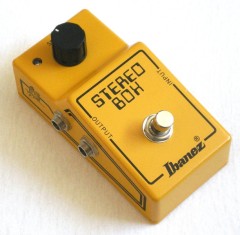 This is the extremely rare second version (v2) of the Stereo Box. It never appeared in catalogs or brochures and was presumably sold only in limited markets like Sweden and Germany, where ST-800 v2 pop up eventually. In more than ten years of collecting Ibanez effects I came across only four of them.