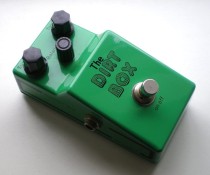 There are some legends around this pedal since it is unbranded, just called The Dirt Box. It's quite obvious that it is a Maxon made pedal and when you check the guts you will see that the pcb copper side states clearly MP-D0701, which means it is an OD-855 Overdrive II. So, everything clarified? No, not at all. Sometimes (on very rare occasions, as this thing is RARE) you can come across a Dirt Box with different guts, namely an OD-850 in disguise (pcb MP-D0501). You cannot tell the difference from the outward - both are just labelled The Dirt Box.

An intersting fact is, the "Amplifer" misspelling on the left edge, which I could not find on other Dirt Boxes I came across. Thus mine seems to be from a pre-production run and the mishap was then fixed for production.