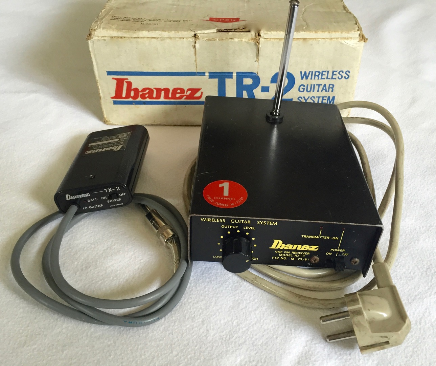 Here we have a very rare Ibanez TR-2 Wireless Guitar System from the early 1980s. It was rather expensive in its days and became notoriously a shelf warmer. A fellow collector from the US informed me that the Ibanez units supposedly were made by the early Samson company - he recalls having owned several of those units identical to the Ibanez system way back in the 80s. I suspect it's the other way round: According to the pcb layout and components used it seems to be Japanese, probably Maxon made. Ibanez/Maxon may have decided to pass the production on to Samson when they found out it didn't sell well within their own strand of products.

I am owning two working units, one even in its original box. The range of the wireless system is somewhat limited but other than that it's quite a decent piece of gear.