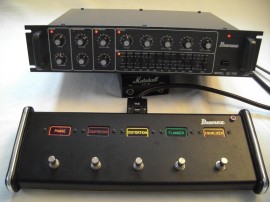 Another significant Ibanez contribution to making a touring musician's life easier was the world's first real multi-effects unit, the UE-700. It was inspired by the Grateful Dead's Bob Weir, who complained about too many wires all over the stage. The UE-700 neatly consolidates five effects in a rack: Phaser, Compressor, Distortion, Flanger and Equalizer, all operated by a special remote footswitch. An Ibanez brochure states in 1979: "Each UE-700 is hand built from meticulously selected components for the utmost reliability and performance. A very limited number of these units will be available and allow us to inform you that they are rather expensive.﻿" Both assertions were quite true. The UE-700's limited quantities were of no matter since it was followed very quickly by the UE400 (1980) and UE405 (1981), which had the advantage of lower prices and larger available quantities.