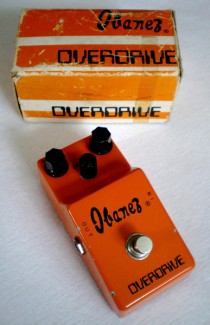 interesting side note: the first batch of OD-850 came in repainted green housings (see last photo in gallery) - presumably these were leftovers of the (unbranded) Maxon pedal called "The Dirt Box" (more) that were on sale in the U.S. for a short period in 1976 with little success.

In June 2016 Ibanez re-issued this first version (v1) of the OD-850. You can easily distinguish the originals from the re-issues as the new ones have LED and DC power jack added. Underneath the nut holding the footswitch sits a (today almost inevitable) white plastic washer.