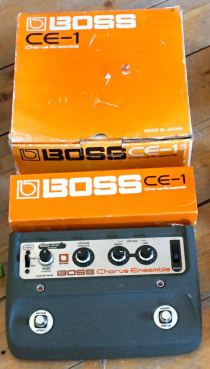 The first officially sold Roland pedal under the Boss brand name became a huge success and started off the long Boss pedal history. The CE-1 is based on a circuit which Roland used in their JC-120 Jazz Chorus amplifiers first released in 1975﻿. It was the first effect pedal to utilize a BBD (Bucket Brigade Device) chip. Originally designed by Philips this IC had just been licensed to Matsushita and thus was available for mass production. The CE-1 is a mains powered unit that features both chorus and vibrato modes. They both use the same BBD circuit so it is impossible to use both at the same time.﻿ Stereo outputs were features not common in effects pedals at that time.﻿