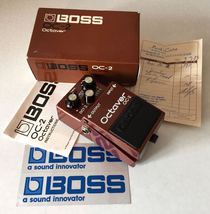 The OC-2 is a basic octaver which can produce two extra voices in addition to the original signal. The first is one octave below, the second two octaves below the original voice. The level of each octave's tone can be adjusted independently. The OC-2 has always been popular with both guitar players and bass players. To get a steady and reliable sound from the Octaver, it is recommended keeping the guitar's action high and avoiding any fret buzz. It is also an advantage to use a compressor in front of the OC-2 to limit the spectrum of frequencies that the OC-2 has to work with.

The OC-2 Octaver had originally light non-metallic brown colour and was labeled "Octaver", while the name changed early 1984 to "Octave" and a darker shade of brown was introduced about a year later.