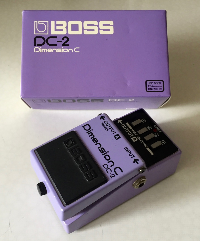 The Dimension C is an analog chorus pedal with fixed presets - no knobs to turn and fiddle around, just four presets to chose from, each performing great. The DC-2 is a down-sized version of the rack mount effect Roland SDD-320 Dimension D. Its name refers to a 3D effect by adding thickness, depth and a width to the signal; stereo outputs give an even wider sense of 3D effect. This pedal is quite rare and if you track one down, it will probably go for big $$$.