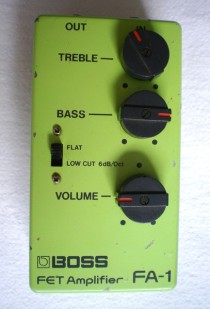 The FA-1 is a great preamp and kinda clean boost cause it always adds a little dirt and fatness to the signal. And this is exactly why it became "the secret weapon" of some famous guitar dudes like The Edge (U2). Furthermore it's its rarity that makes it so desirable. There are a couple of decent clones out there, so don't fall into despair if you're not able to track down an original from the early 80s.