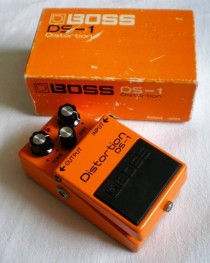 This is one of the classic distortion pedals, maybe even the most influental - with notable users like Kurt Cobain, Steve Vai, Joe Satrini, John Frusciante, Billie Joe Armstrong and many others﻿. The DS-1 produces a distortion sound with a hard edge and is known to have a very low noise level compared to other distortion pedals. Tone gourmets deem the earlier Japan made pedals to sound better than the later ones made in Taiwan. The DS-1 has a very simple circuit, based on a single op-amp, throughout the first years of production this being a Toshiba TA7136AP﻿. The distortion is produced using a variable gain circuit with diodes shorting the output to ground in order to produce hard clipping of the input waveform ( as similar to the Pro Co RAT distortion pedal). This distortion stage is followed by a passive tone filter and volume control. The tone control is scooped in the midrange. It consists of a simple fixed -6dB/okt low pass filter and a simple fixed -6dB/okt high pass filter using a potentiometer to mix the two signals.﻿