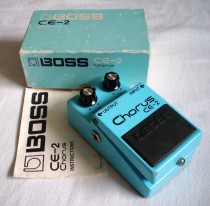 The CE-2 was Boss' first compact pedal chorus, succeeding the CE-1, which was released 1976 and contained exactly the same circuit as the Roland Jazz Chorus JC-120 amplifier. The CE-2 took the idea of the CE-1 to a different level since it is mono and has a remarkable mid-boost. The early CE-2 used the 3007 bbd chip, later Japanese CE-2 pedals used the 3207. The 3007 chip was used in the original pedals in the late 1970s and very early 1980s and allows higher levels and less noise without clipping your signal.