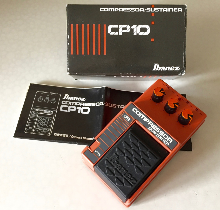 Compressor/Sustainers, unlike distortion effects, do not drastically alter the sound (distort it) to create sustain. Instead they maintain the basic integrety of the original sound while at the same time adding subtle changes to the attack and sustain. They also even-out the overal output gain, providing a clean, uniform sound.

Compressor limiters are used very often on vocals or extremely dynamic instruments to give uniform volume or amplitude in many applications. Peak levels are limited so tape saturation won't occur in a recording situation, allowing higher recording levels which increase signal to noise ratio. Dead spots on certain instruments can be eliminated live and in the studio. Stage monitors can be heard better when soft vocals normally would be buried, yet feedback can simultaneously be controlled by keeping a limit on the volume, helping to prevent the need for unnatural over-equalization. These applications aren't typical of how a guitarist uses a compressor but keeping them in mind will lead to efficient and creative use of the CP10.

Most often a compressor is used on a guitar to influence either the attack or sustain portions of the sound. To emphasize the attack, gradually increase the attack control. Too much emphasis can ruin the sound by eliminating the sustaining pitched portion of the sound. Be sure the sustain time control is set at a moderate level when emphasizing attack to eliminate this side effect. This usage is especially nice for muted or "blocking" styles of playing. If the sustain is set too high, notes following a heavily attacked note may not come out well because the CP10 is still sustaining the previous note. Another major usage of compressors is to add sustain without distortion. Sustain isn't actually added but as the sound naturally decays, the CP10 increases it's gain giving the impression that the sound isn't dying out but sustaining smoothly. Once the signal has dropped below a certain point, the compressor can do no more than raise the level of the remaining noise. Careful adjustment of the sustain control to playing techniques can keep noise from getting out of hand. Low sustain levels are useful for limiting applications.