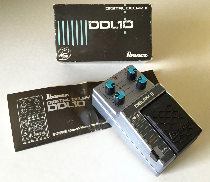 The DDL10 is a straight forward delay unit with variable delay times ranging from 19msec to 900msec. The Mode selector divides delay times into four intervals and ultra fine tuning is achieved by the D-Time knob. There is a Repeat control to vary multiple repeats and a D-Level control that lets you select how much effect is mixed with the dry signal. The stereo output jacks deliver a dry and normal effect out, allowing dramatic doubling, slap back and delay effects.

The original signal (such as a guitar sound) is converted into a digital representation of that sound. In this form it can be manipulated without further degradation of quality. Some change in tonality is unavoidable, but the high resolution or "sample rate" of the new Ibanez series keeps this to an almost inaudible level. The DDL20 allows manipulation of the signal by setting up a time period to elapse before the sound is "played back". Of course it is converted back into analog form first.

Time periods between original and delayed sound are adjustable by setting the "Delay Time and Mode" controls. A very short delay time of equal volume (set by "Delay Level" control) to the original sound gives an ambient or spacious quality, fattening up the sound considerably, especially when a second amp is used creating a full stereo effect. Slightly longer time settings can give the impression that two identical parts are being played simultaneously, called "doubling". The classic slapback effect made famous in the 1950's and 1960's using tape delay can be achieved by lengthening the time to around 80-120 milliseconds (ms=1/1000 second) and dropping the level to about 1/2 the volume of the original. By using the "Repeat" control, additional repeats or echoes are created as the delayed sound is fed back to be delayed again (sometimes called feedback or regeneration). With a few repeats and a setting between 200-400ms, very popular echo effects are achieved. Delay times up to 900ms are available for creating echos that happen at a specific time in the musical context (such as 1 1/2 measures later)