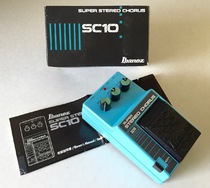 If you have been shopping around for a stereo chorus, look no farther. The SC10 is the basic chorus unit of the Power Series, that goes far beyond just being basic. In addition to the usual speed and width controls there is a new delay time control that lets you capture even the most subtle of chorusing effects. The analog BBD circuitry provides rich mellow tones while drawing very little current, giving you long battery life. The SC10 also features normal and inverted stereo outputs allowing you to play in full, rich, true stereo.

Chorusing is an effect that is created by mixing constantly changing, short delayed signals with normal, dry signals, producing a deep, melodic type vibrato. The SC10 uses analog BBD type circuitry to produce this effect, giving the SC10 a very warm tone, while the three control knobs allow full variation of the effect. The range of the effect is controlled by the Width knob, where as the rate at which it moves is controlled by the Speed knob. The D-Time knob varies the point in time where the effect is created.

Although the chorus effect seems to improve almost any sound, the key to it's proper use in music is restraint. When the special stereo effect is used to emphasize or bring attention to a certain passage, it has more exciting effect on the listener than constant usage. Although long delay settings increase the richness of the sound, too high of a setting on the width control causes an offensive out of tune impression. Varying the speed for different songs adds interest and keeps the chorus "fresh" sounding.