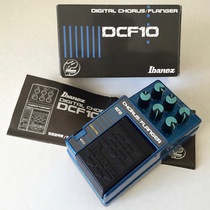 Why buy a separate chorus and flanger? Here is a pedal that will operate either as a chorus or a flanger and will do so with such high fidelity that you may never use a traditional chorus or flanger again. Because it's digital the DCF10 boasts the 7kHz bandwidth, it also has an 8:1 sweep ratio with variable speed and width controls. Delay times are variable from .25msec to 128msec and are easily and precisely controlled via the four position Mode selector and D-Time knob. The Regen knob controls delay time repeats and adds "Swell" to the flanging effect. The stereo outputs provide normal and inverted effect signals for true stereo chorusing.

Like the DML20, the DCF10 is a digital delay with an L.F.O. However, the range of delay times is lower with a minimum of .25ms. This is much shorter than most units and is very useful for flanging applications. Extremely short delays can cause phase cancellations and resonant peaks that actually alter tonality (sometimes referred to as a "comb filter" because of the comb-like appearance of the frequency response pattern). Raising regeneration (or feedback) increases the complexity of the pattern and the L.F.O. can generate a sweep through many patterns (the whooshing effect).

Chorus and flange settings are essentially the same as the DML20 (Regeneration corresponds to Repeat on delay models). Shorter delay times allow for more sensational flanging effects. Changing the delay time varies the pitches which are resonant or being cancelled. More regeneration increases the number of delays (not heard as repeats) which increases harmonic richness as more resonances are created. Speed changes the rate of the sweep cycle, while Width allows narrow or broad sweeps of the "comb". Non-sweeping (width=zero) settings can be used to add unique presence and cutting power by emphasizing certain harmonics (finetuned by delay time). Since the difference in volume or amplitude of different notes or harmonics can be so great, a compressor/limiter following the DCF10 would keep annoying peaks under control. (Ex: a 4kHz tone delayed by .25ms would be doubled or 3dB louder while a 2kHz tone at .25ms would cancel out to inaudibility.