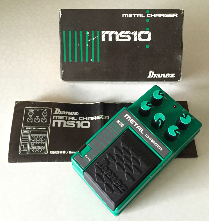 If you are looking for that hot and heavy, massive metalmania distortion, hook up with an Ibanez MS10. It has more "raw gain" than any other distortion available. It has five controls to let you really capture the rage in your guitar. There is a Drive control that varies the amount of distortion, an Attack control for predistortion, treble and boost and Punch and Edge controls that provide post distortion equalization. Plug into an MS10 and you will swear that you have a wall of power behind you.

The MS10 was designed specifically to recreate the tonality of large British amplifiers. Because of various reasons including different tubes (valves), equalization voicing, speaker characteristics and cabinet resonances these amps sound drastically different than other amps. The punch control simulates the cabinet resonance at certain low frequencies while the attack and edge concentrate on high frequency e.q. and speaker traits. Distortion is adjustable and at full settings simulates not only pre-amp clipping bu adds the effect of power-amp and speaker overdrive.

As with any distortion device, location in the "chain" or signal flow is very important. It is usually desirable to distort the guitar signal first before adding further processing (with possible exception of compression).

Since many large "stacks" don't have effect loops or outputs after the pre-amp, these amps are "miked" and the sound engineer adds processing to the microphone channel. In large halls or studios this is fine because the guitarist hears the finished product through a fine monitoring system. But for most players this is impossible. Even if you own an amplifier like this, chances are you aren't getting the "finished product".

The MS10 at the front of a chain of processors may actually sound better than processors fed into expensive amplifiers. Don't distort your processing, distort the guitar then process the distortion. (experiment with placement of e.q., compressor and phaser, but always place delay effects "post distortion")