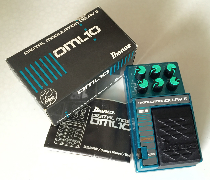 The new Ibanez DML10 is the most versatile compact effect ever developed. This one compact effect is capable of doing everything that the large rack mount digitals can do. To begin with, it can produce delays from 9msec up to 900msec that are easily controlled by the four position mode selector. The D-Time knob fine tunes your delay time that you want. There is a modulation section with a full 8:1 sweep ratio giving you lush chorusing and flanging effects. The stereo output jacks produce normal effectand dry (no effect) outputs for real stereo imaging, doubling and sound on sound effect.

The DML10 operates on the same principles as other delays, such as the DDL10, but with the added feature of modulation. An L.F.O. (low frequency oscillator) changes the delay time periodically. The sweep width, or distance between extremes in delay time, is set by the width control. The period of the sweep cycle is set by the speed control. When delay time is changed (manually or via L.F.O. at regular intervals) the pitch also changes. At short delay settings the pitch sweep is more noticeable than the delays.

Chorus effect is achieved between 3.5 and 28ms without repeats. Start with the level about 4, width about 6 and speed at 4. As the speed is increased a more vibrato like effect is heard, especially if the delay level is raised to mask the original. At slower speeds and higher width settings more "movement" is present in the sound. Lengthening delay time gives an apparent "doubling" effect. A low width seting and slow speed setting will give a subtle detuning to the doubled sound further enhancing it's quality. Increasing repeats slightly animates the sound even more. Decrease the delay time below 15ms and the pitch/delay sweeps are replaced by a "swooshing" sound called flanging. As the delay time is decreased and all other controls increased the effect intensifies. Fast speed settings simulate a rotary organ speaker while slow speeds duplicate the sound created when two tape records playing the same music are slightly out of synch. With the width set at zero, standard delay effects are available without modulation.